Shay Youngblood’s Black Girl in Paris is probably the first novel I ever bought in my life just because it was pretty. And as a recent transplant to Manhattan, at just 24 and on partial scholarship for an M.F.A., hardback books were not supposed to be anywhere in the budget. But central to my fundamental core are Black girls, mythology, Paris, James Baldwin and the Bible (the novel’s heroine is named Eden). So I would have bought the book with just a title on a blank cover and a description in back.

You’d be correct to expect this story of a young Renaissance woman’s fantasy trip, to live like her iconic Black American idols, to be sexy and to weave in Josephine Baker. The novel’s heroine goes to Paris in search of Baldwin and finds jazz, interracial love and the freelance hustler life: Like Youngblood did in her life, Eden works as an au pair and artist model. I was delighted a short film was made from this novel, directed by Kiandra Parks. 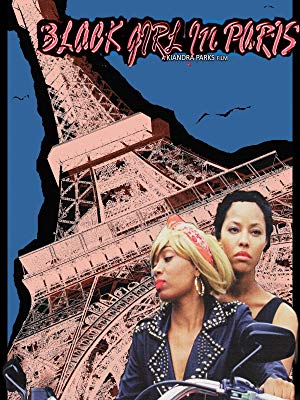 I can not recall when I first saw this title; it could have easily have had something to do with those Harlem street vendors who mysteriously sold $7 first editions, or one of the treasured publications sprouted in the nineties emergence of Black books as mainstream. At that time, the “African-American Section” of my bookshelves was in its toddler stage. It would take another decade to estrange from my canonical imbalance that a Western humanities education creates (on my own, I had to shift my Francophone studies from Sartre and Flaubert to research Baker and Baldwin’s place in Parisian culture). When I first got it, Black Girl in Paris went with African-American books. Now, it rests among Sartre and Flaubert.

Thus something naturally and organically developed for me from this other Black woman’s art: a sense of true blending with the general humanities. Most Black women writers and artists I know do consider ourselves to be unapologetically Black, working from a place where that cultural and melanin determination is supreme. But nobody is trying to force representation or act like we can possibly speak for all brown women. We expect we should be read, watched and included in general undivided arenas as mere ingredients- not separate pots- to the collective human story.

And sadly, when a Black woman or girl’s story just involves passions and (dare I say) a charmed life, it can be seen as not “Black enough.” This is undoubtedly why Kathleen Collins was one of the more prolific African-American writers, scholars and artists- but remained under the radars- until now. I am so geeked to see Kathleen Collins work and life experience a resurgence in popular culture. I hope it does not die down!

Collins is the first African-American woman to write and direct a feature film intended for widespread distribution. It is a rare cinematic portrait of a Black female as a thinking, cerebral intellectual. She was an activist, poet, filmmaker, educator and playwright born in New Jersey but planted in Harlem later in life. The incredible body of work she produced in her 46 years has been resurrected everywhere from A Public Space to Criterion Films. Her ample diaries, letter and papers have enjoyed new release as well as a recent Paris Review feature, “Notes from Kathleen Collin’s Diary.”

Like Youngblood, Collins depicted interracial love affairs which have remained stubborn taboos- particularly from Black women’s perspectives. Their works depict such relationships honestly as born of interest and passion like any others, and they both slightly address their stigmas and pressures without falling into tragic soapboxes.

I wrote about why I love Collin’s restored 1982 feature film Losing Ground in a series I did here called “Yes! Films About Black Writers Do Exist”:

Seret Scott plays Sara Rogers, a cerebral woman frustrated with not only her marriage, but blanket misunderstandings of her work as a philosopher, intellectual, thinker and researcher. The film features several touching and charming “A Room of One’s Own” moments, as Sara often mysteriously retreats to sit alone with her notes and notebooks in a manner leading most around her to label her negatively. Her character explores the subjugation of women and escape routes to empowerment. Losing Ground’s non-racial narrative and presentation of black bodies as mere subjects in life with their humanity unburdened by race was perhaps too radical for audiences at the time. Kathleen Collins’ daughter Nina Collins set out restoration efforts for the original negatives of the film, leading to a resurgence of interest in it today.

PS. I included Collin’s recently published work in my Black History Month Book recommendations over at Goodreads. Click the image to redirect. Thank you!