Once I was finally led through Their Eyes Were Watching God in a college program, the reasons I came to love Hurston involve primarily her ability to conjure the exact sounds of the speech which resurrect for my imagination the voices I had heard back home and beyond, lonely for them now in my strict English language program. Though many people I know own the book it still suffers from not actually being read. What accounts for this renewed interest among the black women I know is that Zora Neale Hurston benefited from a massive revival afforded by Oprah’s stamp. Harpo Studio’s ABC version of the film, produced in 2005, was not to be missed.

Next to Alice Walker’s impassioned efforts to revive discussion of Zora in the 1970’s, this film marks the most massive effort to bring her work to a wider contemporary audience. The discomfort with language as a marker of an identity the masses may not wish to confront is evident by the closer physical resemblance of the film’s star, the interracial Halle Berry, to the type of women Janie Starks knew she could never be. In my experience the reaction to this casting choice from those “in the know” of Hurston’s work was always the same—a laugh.

In addition, the crossover appeal of Berry to the white female suburban audience which daytime television depends upon was established by her Hollywood A-list status, contributing to the diminishing of difference in the film version. The little book that was often never read received some validation for this audience from a film which stayed true to the look of Zora’s speech, but not to the look of her characters: “Janie” and “Tea Cake” are finally on a first-name basis in my worlds. Although many do not have patience for her writing, love for Zora Neale Hurston exists strongly because of her story. We have Ms. Walker and Ms. Winfrey, ironically united by Winfrey’s iconic turn as Walker’s Celie in The Color Purple film adaptation, to thank for Ms. Hurston’s enjoyment by so many today.

Google’s decision to feature Ms. Hurston as a Google Doodle on this day last year, in honor of what would have been her 123rd birthday, is a similar gesture as the television film adaptation, albeit more ephemeral and bandwagonish. While one had to be a fan of Hurston to begin with or seduced by television advertising to fanfare the film, her Google Doodle gave half the world the ubiquitous and involuntary confrontation with Hurston’s image, biography and works. It was a great day, I recall. 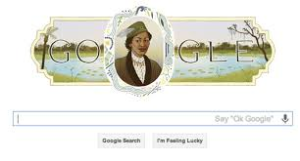 What is clear from my introduction to and experience her are the ways in which aesthetics, style and meaning are subject to negotiation and compromise when ascension to national and mass popularity necessitates that the image of a public persona, and most often their work as well, must be mediated. It is impossible to say who suffers most when this negotiation and compromise occur—the artist, or the public who is manipulated into thinking they know the artist when they really don’t. If she had written “proper” English, would she have died rich?

In the case of black women, whose myriad of subjective classifications present the highest number of obstacles to surmount in order to achieve mass appeal to a white audience, the fabrication of myths and manipulation of meanings inherent in their work is most necessary if the project of popularizing their art is to be successful. How then are the black women whom Hurston called “the mules of the world” to enter themselves into the national cultural picture?